Our arrival in Tromsø was even more spectacular than our arrival in Trondheim with stunning scenery and passing under the bridge,  we were now well inside of the Arctic Circle and Tromsø is one of the major northern cities. 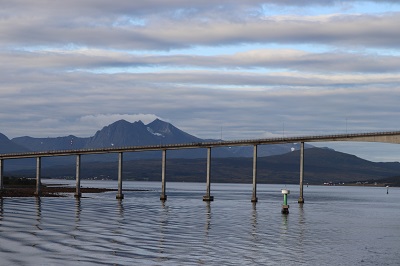 Like many places in the far north, Tromsø was occupied by the Vikings in the 7–8th Centuries but there is evidence that people lived here over 10,000 years ago. This area has also been the home of the Sami for centuries.

Tromsø was issued its city charter in 1794 by King Christian VII and gained in importance due to fishing and hunting for furs. By the end of the 19th century, Tromsø became a major Arctic trade centre from which many Arctic expeditions originated. Explorers like Roald Amundsen, Umberto Nobile and Fridtjof Nansen often recruited their crews in the city.

When Germany invaded Norway in 1940, Tromsø served briefly as the seat of the Norwegian government. In nearby Tromsøy island, the German battleship Tirpitz was sunk by the RAF off the Tromsøy island in 1944, killing close to 1,000 German sailors.

The population of Tromsø municipality today is around 70,000 and despite its location it is an increasingly popular place to live with plenty of bars, restaurants and cafes to cater for the locals and a lively student population.

We arrived fairly early in the morning and the deserted streets gave us the opportunity to explore before the city comes to life. Like Trondheim, Tromsø has lots of picturesque wooden buildings and has one of the largest wooden cathedrals in Norway. Interesting travel fact, the city centre of Tromsø contains the highest number of old wooden houses in Northern Norway, the oldest house dating from 1789.

Talking of cathedrals, we were anxious to visit the Arctic Cathedral which involved crossing over the river. The Arctic cathedral is a major landmark of the city and is easily seen from many vantage points in the city. From a distance it does not look that large, however when you get closer you begin to understand its scale.

Mrs Nice mentioned that it does look a little like Sydney Opera House and you could see some similarities. Unfortunately the cathedral was not open but peering through the window, you could see the magnificent stain glass window and the simple layout of the church. Whilst on this side of the river, you can go to the Fjellheisen cable car that will take to the top of Mount Storsteinen. With limited time we decided to decline this attraction to explore the main city.

The centre of the city is located around the large wooden Lutheran cathedral and the statue of Amundsen with the cultural centre close by. The main square was set up for a concert, Tromso has produced a number of famous rock stars and has a number of festivals throughout the year.

The quiet start to the day was now gone and locals began to fill the main shopping areas mingling with visitors. For a small place, Tromso seemed to have large number of hotels in the centre which is perhaps an indication of its popularity. 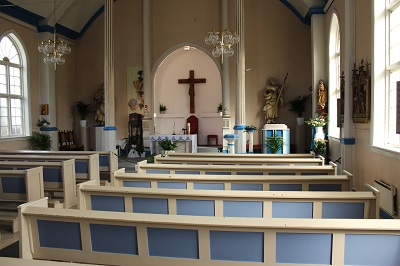 Up the hill slightly is the wooden Catholic cathedral which was built at the same time as the Lutheran one which was probably part of a battle for the local souls in the 19th century. The cathedral was a bit of a surprise inside being blue and white with little of the ornamentation you associate with Catholic churches. There was also a series of symbols on the ceilings that was rather unusual.

Deciding it was time for a break we headed for the northernmost branch of Burger King, we are not usually great fans of burger joints, however after the rather rich food of the ship we thought it was a pleasant change. Obviously fast food means something different up in the frozen north because it 20 mins for our meals to be produced.

How much was that? I asked Mrs Nice, don’t ask she replied before I saw the bill for around £16. Coming from London we are used to expensive food and drink but Norway takes it to a different level, if you ever come to Norway be aware of the high price of particularly everything.

One location I was looking forward to seeing was Olhallen which is the city’s oldest pubs and one of most famous pubs in Norway and is attached to one of the northernmost breweries in the world. After a walk along the Storgata, we found the pub which is attached to the famous Mack Brewery established in 1872. 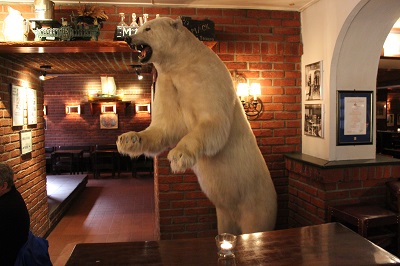 Mrs Nice went inside to get a drink as i found a table outside, suddenly Mrs Nice appeared and said you must come inside, there is a polar bear in here. Intrigued, I followed her in the pub and there was indeed a life-size (around nine feet) stuffed polar bear. Looking around the inside of the very attractive and interesting pub we decided to find a seat and enjoy the ambience. Mrs Nice came back with two halves of Mack’s Pilsner and we settled down to enjoy our drink. It was obvious to the various languages being spoken and photographs being taken that the pub is a bit of pilgrimage for beer drinkers and it certainly does not disappoint with lovely wooden fittings and plenty of pictures and other paraphernalia on the wall.

Our next stop was the nearby Polaria museum in the most unusual shaped building; it looks like a row of books toppling over. Nearby was the historic sealing vessel MS Polstjerna.  We visited a number of arctic type museums when we were in Bergen and Oslo some years ago, so did not feel the need to reminded that the Arctic is a cold and hostile place.

On the other side of the city, we had seen the Polar Museum which was in an attractive old building with a number of items outside.

By now, the city was really coming alive with buskers on the main streets and plenty of shopping activity, it was nice to see that many of the shops were local not global luxury brands, although the prices were probably have been roughly the same.

Although Tromsø is in the Arctic Circle it seems to be thriving with lots of places to eat and drink, hotels, shops and cultural events. On a bright summer’s day, everyone was enjoying the sunshine, however it might be a different story in the winter with the cold polar days, although strangely the city does not suffer from extreme cold associated with this latitude very often due to the warming effect of the Gulf Stream.