After the rather sedate charms of Auckland it was time to move on to the United States and face the long flight to San Francisco. Anyone who is thinking about going to the States should be aware that it is often a complicated business nowadays. Before our trip, we went on the various websites to fill a variety of forms before being authorised to enter the country. Nevertheless, stories about long queues and people being refused entry for various reasons fill the newspapers. Therefore it was with some trepidation that we approached the customs and presented our documents, after being finger printed and questioned about how long we were staying in the country, we finally made it into the country.

We had spent most of the day which was the 16th September in Auckland before we took the 11 hour flight to San Francisco, however because of the vagaries of time differences, we arrived in San Francisco in the afternoon of the 16th, meaning we would have roughly a 36 hour day.

We decided to use the BART Train from the airport to Embarcadero Station and then get a taxi to the hotel which was situated on Nob Hill overlooking the city. Arriving at the station, we knew the hotel was not far away, so I suggested walking. Mrs Nice looked quizzically and said ‘ have you seen the hills.’ I replied yes but this way is quite flat and we should OK.

Most couples will know that on holidays that one person can make a suggestion that seems reasonable but ends up disastrously. Well this was one of those occasions, the hills began to get steeper and the cases got heavier as we pushed on, but there was no turning back now as I said ‘it is just around the corner.’ Unfortunately around the corner was the steepest part and we struggled to the top, ‘that was not too bad’ I joked before looking at Mrs Nice’s red face and realising that she was not in a joking mood.

Has I had shown, it is very easy to underestimate the hills of San Francisco and when we walked around the Nob Hill district, you did get a clear idea that this was not going to be a gentle stroll kind of place. Our hotel gave us a room overlooking the San Francisco skyline which is interesting rather than spectacular. The hotel was large with long corridors which reminded me of the Eagles song ‘Hotel California’ and especially the line ‘ this could be heaven or this could be hell’. The hotel was not heaven but it was well run with a laid back approach with gentle rock music playing in the lift and communal areas.

The following day, we decided to walk down the hill through Chinatown to Fisherman’s Wharf which is one of the main tourist attractions of San Francisco harbour. Unlike many other cities, San Francisco’s Chinatown covers quite a large area around Grant Avenue, it is one of the oldest Chinatowns in the United States and one of the most interesting with a number of old buildings as well as the more modern gift shops and restaurants.

Fisherman’s Wharf and especially Pier 39 is like an old seaside resort with plenty of places to eat and drink. There are also a number of tourist attractions like the Aquarium of the Bay, Madame Tussauds and the Maritime National Historical Park with a range of old vessels. One more unusual aspects of Pier 39 is the large number of sea lions basking on the wooden boards in front of the pier. The sound of sea-lions snoring filled the air as the crowds gather around and take photographs. 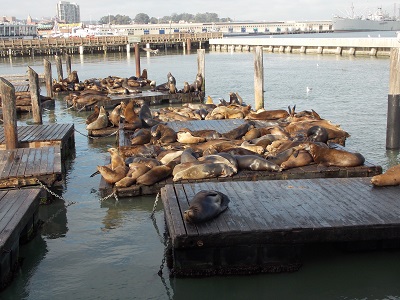 Unlike Sydney Harbour Bridge which is in the middle of city, San Francisco’s iconic Golden Gate Bridge is around four miles from Fisherman’s Wharf. Riding a bicycle down and across the bridge is very popular with a number of cycle hire places doing brisk business. 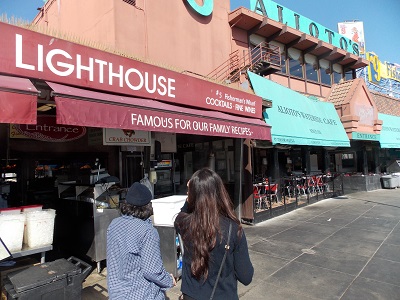 We decided we wanted a closer look at the bridge, but thought we would not walk the whole distance. So we began our walk from Fisherman’s Wharf passing Ghirardelli Square, Boudin Bakery, The Cannery before following the shoreline to the Aquatic park where it is safe to swim or paddle.

Fort Mason is a redeveloped old Civil War era Military base, the very attractive Crissy Field is reclaimed wetlands where the local population come down for a barbecue on Sundays. We were so fascinated by these aspects of the walk that before we knew it we were at the Presidio area which takes you right up to the bridge itself.

Arriving at the bridge, we stopped for an ice cream and went into the fascinating Fort Point National Historical site which is located underneath the bridge. Rangers point out some of the interesting facts about this Civil War fortification before you climb to the top of the structure to get great views of the bridge, the harbour and the Pacific Ocean.