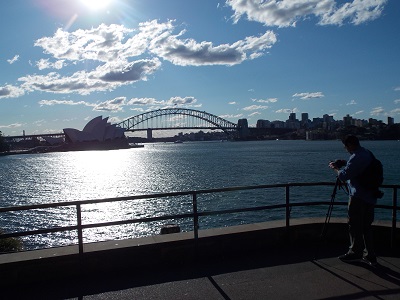 To anyone arriving in Sydney, the Sydney Harbour Bridge and the Opera House are fascinating iconic sights which dominate the harbour.

The bridge is nicknamed “The Coathanger” by locals and is in some ways similar to Tyne Bridge in Newcastle. This is not surprising because they were both built by the British firm Dorman Long and Co Ltd, of Middlesbrough.

Soon after we arrived in Sydney, we thought it would be interesting to take a closer look at the bridge and on a clear bright morning we made our way up to the Rocks area to find a way up to the bridge. Although there is a number of signposts, the stairs up to the bridge near Cumberland Street are tucked away behind some buildings.

When you reach the same level as the road, you get some idea of the enormous scale of the bridge. The arch has a span of 504 m (1,654 ft) and its summit is 134 m (440 ft) above sea level. The total weight of the steelwork of the bridge, including the arch and approach spans, is 52,800 tonnes. About 75% of the steel was imported from England, however the bridge is held together by six million Australian-made hand-driven rivets made in Melbourne.

It is only when you reach the bridge that you realise it is actually quite wide carrying trains, cars, bicycle, and pedestrians between the Sydney central business district (CBD) and the North Shore.

Although this stretch between the North and South shore is a natural place to build a bridge, it was not until 1932 that the bridge was finally opened. Previous to this date, plans to build a bridge across the harbour were put on hold due to lack of funds or the technical difficulties involved. The undertaking of building the bridge in the depths of the Depression provided some badly needed employment to thousands of people and is another reason why Australians are so proud and grateful for the bridge.

Walking across the bridge is often quite blustery and the side fences which have been added to prevent people from committing suicide by jumping from the bridge mean that the wonderful views of the Opera House are achieved by peering through the fence.

Whilst on the bridge, you can occasionally spot groups of climbers which ascends to the top of the bridge, each climb takes three-and-a-half-hours including the preparations. The four pylons on the bridge have no functional role but are used for various things including a museum and tourist centre. 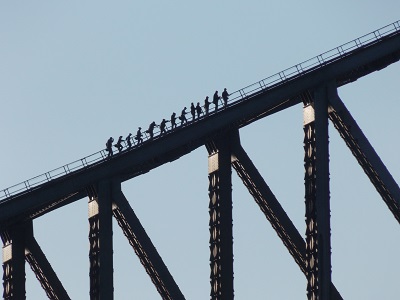 Needless to say we were happy to wander across under our own steam rather than join the Bridge Climb, until we decided it was time to return. On the way back, we made the slight detour to the southern end of the bridge which is located at Dawes Point in The Rocks area. Here is a great view from under the bridge and you can see the rather bizarre large painted face that is the entrance to the Luna Park amusement park at Milsons Point on the North Shore. 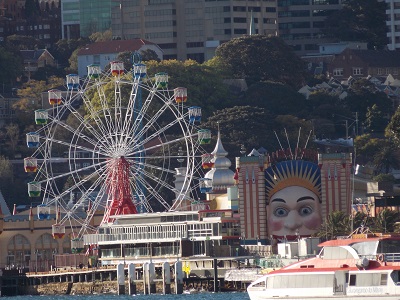 Bridges are not only useful but often serve a symbolic purpose, this is certainly the case with the Sydney Harbour Bridge.

The Harbour Bridge is an integral part of the Sydney New Year’s Eve celebrations each year and is generally used for other major celebrations such as the Sydney 2000 Olympics.

This site uses Akismet to reduce spam. Learn how your comment data is processed.